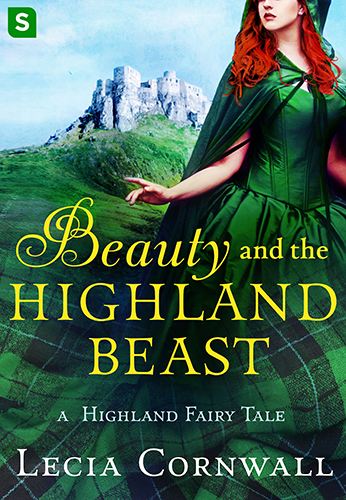 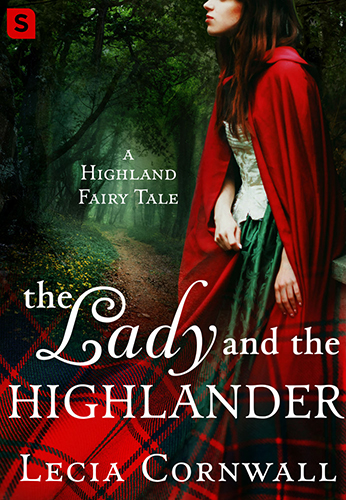 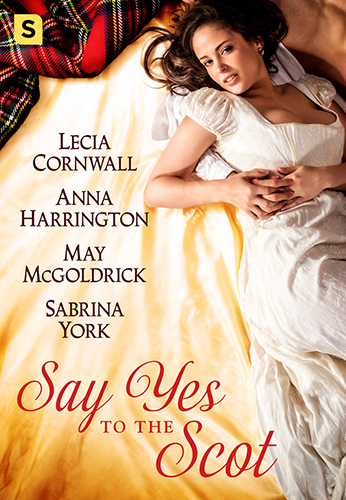 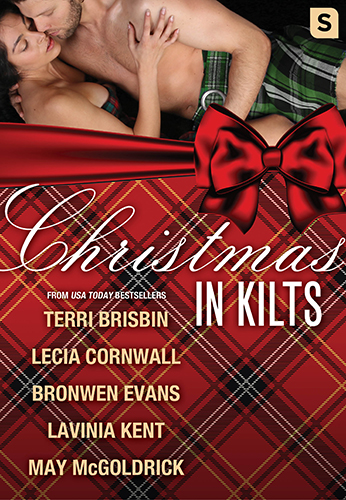 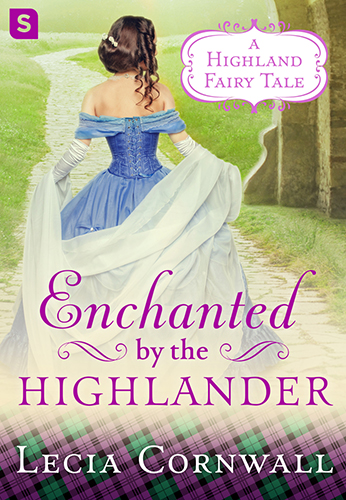 I was captivated from the first to last pages! 4 stars.
—Angel’s Guilty Pleasures
This book hit every romantic part of my soul. I give it 5 stars!
—Sportochick’s Musings
Enchanting. Exciting. Charming. The ‘fairy tale twist’ is a trendy trope these days, and I can say The Lady and the Highlander is the best of the bunch. Grade: A.
—Smexybooks
Majestic and Beautifully told. I can’t wait to see which fairy tale Cornwall does next!
—Addicted to Romance

Beauty and the Highland Beast

Once upon a time, there was a Scottish pirate, the fine, handsome son of a clan chief. On his bold voyages, Dair Sinclair tempted fate once too often, and when the English finally captured him, he faced unspeakable torments. Now, Dair can’t forget, or heal from the terrible injuries. He’s known as the Madman of Carraig Brigh, a raving, scarred, terrifying beast. His father seeks a healer for his son and heir without success, until a dark prophecy directs him to find a virgin to save his son.

Fia MacLeod is easy to overlook among her lovely sisters, despite being every bit as pretty, since she bears scars and a limp from a terrible childhood accident. Fia has a remarkable talent for healing wild creatures, and when the chief of the Sinclairs comes looking for a virgin healer, she goes to aid the Madman of Carraig Brigh. She faces anger, pain, and suspicion from Dair, but there is attraction there as well, and a kindred understanding of what its like to be lost, scarred, and afraid.

As Dair and Fia draw closer, and love and desire grow stronger, others seek revenge for Dair’s past deeds, and Fia is accused of black magic and witchcraft. Only with courage and true love can Fia save herself and the man she loves, and restore the heart of the man she loves…

When A Laird Finds A Lass

There’s an old Highland legend that says seals can come to shore, shed their skins and walk among human folk. If a man finds a selkie lass’s skin and hides it from her, he can keep her for his own. But if she discovers her skin, she’ll return to the sea forever…

Once upon a time, there was a lass who fell from a ship into the cold water of the sea on the way to her own wedding…

Malcolm MacDonald is a lawyer in Edinburgh when he unexpectedly inherits his father’s title of Laird of Dunbronach, a place Malcolm has not seen since he left as a small child. He must face a clan in crisis that desperately needs a leader, but doesn’t trust the man they see as a Lowlander and an outsider. They’ve brought Malcolm to Dunbronach to make a magic wish, which according to an ancient legend, they believe will restore the clan to health and good fortune. They insist he must cast aside his English fiancee and marry a Highland lass, but there’s one rule—no MacLeods.

One day, while walking along the beach, Malcolm sees something in the water, and finds a young woman, half drowned and barely alive, and wearing a MacLeod plaid. To save her from the revenge of his clan, Malcolm hides the telltale garment.

When the lovely lass wakes, she cannot remember a thing, including her name. The fanciful MacDonalds decide she must be a selkie.

As new dangers threaten the MacDonalds of Dunbronach, the lass from the sea charms them, helps them, and teaches Malcolm some very important lessons about how to be a Highlander and a laird. And as he falls deeper and deeper under the spell of the lovely lass from the sea, he keeps the one secret that could destroy them both—her connection to the terrible, barbaric, enemy MacLeods.

When the secret comes out, and she finds her plaid and remembers who she is, Malcolm is forced to make a difficult choice to win her back, facing his darkest fears and his worst enemy for a chance at true love.

The Lady and the Highlander

A reimagining of Snow White.

When Laire MacLeod’s father marries again, his lovely new bride casts a dangerous spell over the MacLeods of Iolair. Only Laire, the fairest of all Laird MacLeod’s lovely daughters, is untouched by her stepmother’s evil schemes…

Iain Lindsay sold his soul to try and save his dying wife, and now he serves as huntsman to the new Lady MacLeod. For years he’s turned a blind eye to her wicked activities, but one look at Laire MacLeod’s delicate beauty makes him question his dark past. Ordered to kill Laire, he instead sets her free, only to be ordered to pursue her when she flees to Edinburgh for help.

But Edinburgh is a dangerous place for even the bravest Highland lass, and Laire soon finds herself in trouble. Rescued by a band of wee thieves, she begs their help to help her save her family. But the huntsman is on her trail, and Laire must choose to keep running or to trust the enemy she soon grows to love. But will their love be enough to break her stepmother’s evil hold, or will it doom them forever?

Say Yes to the Scot

You are formally invited to the Highland wedding event of the year. These four lasses are about to meet their matches in an original digital anthology featuring stories from New York Times and USA Today bestselling author Sabrina York, Lecia Cornwall, Anna Harrington, and May McGoldrick.

HOW A LASS WED A HIGHLANDER by Lecia Cornwall
In this retelling of The Princess and The Pea, Laird Alex Munro of Culmore has just five weeks to find a bride and marry her…or else the clan will be cursed with ill luck. Cait MacLeod finds herself caught in a clan feud, and when she tries to stop a deadly raid, she ends up as Alex Munro’s prisoner. With timing running out, is this couple meant to be?

A MATCH MADE IN HEATHER by Anna Harrington
She was the laird’s daughter. He was nothing more than a penniless, nameless Scot with nothing to offer but his heart. Fate tore them apart, but now he’s back in her life with status, money and a title. Can they let go of past hurts and find love?

A MIDSUMMER WEDDING by May McGoldrick
Their marriage was two decades in the making. The young, educated woman and her highland, pirate husband, betrothed when they were still children. But on the day of their wedding, Elizabeth Hay and Alexander Macpherson are in for a surprise.

THE SCOT SAYS I DO by Sabrina York
Catherine Ross’s world is turned upside down when her brother gambles away every penny they own. But to make matters worse? He’s lost everything to none other than Duncan Mackay, the rugged Scot who Catherine loved for years—but he never noticed her, and now she positively loathes him. But her brother’s in danger of going to Newgate, and the despicable Duncan has a plan- she can claim back the money and save her brother. If she marries him…

Currently out of print

Tis the season to fall in love! These five bestselling authors bring you great tiding of highlanders and romances this holiday season!

A HIGHLAND CHRISTMAS WAGER by Lecia Cornwall
When a snowstorm forces a charming lass hiding a broken heart to take shelter in a castle with three fine Highland lairds just days before Christmas, there’s a game afoot—who will be the first to win a kiss and maybe her heart.

A HIGHLANDER’S HOPE by Terri Brisbin
A village harlot who would never dream she could have a different life meets a Highlander who visits for the holidays and brings with him an offer and hope.

A SCOT FOR CHRISTMAS by Bronwen Evans
She’s ready to embrace her life and future as a spinster, he’s trying to have one last hurrah before he gives into his family’s wishes and proposes marriage to his neighbor, but fate has other ideas when the lady and the Scot meet at a holiday house party in the wilds of Scotland.

LEFTOVER MISTLETOE by Lavinia Kent
What happens when a highlander finds himself stranded, maybe kidnapped, with an English lady around Christmas… maybe the mistletoe will help answer that question.

SWEET HOME HIGHLAND CHRISTMAS by May McGoldrick
An encounter between an English officer and a desperate aunt trying to keep custody of her young niece leads to a little magic during the holidays.

Enchanted by the Highlander

Gillian MacLeod is shy and quiet, the least likely of all her sisters to seek out excitement and adventure. But on a moonlit night at a masquerade ball, Gillian steals a kiss from a mysterious stranger, knowing she’ll never see him again.

John Erly, disowned by his noble English father, started a new life in Scotland. Most people are suspicious of the foreign mercenary and he does everything is his power to avoid romantic entanglements. But he can’t forget the bewitching beauty who kissed him in the dark, and stole his heart, even though he has no idea who she might be.

A year later, John is given the duty of escorting Gillian to her wedding and immediately recognizes her as the temptress he’s dreamed of for months. There’s not much he can do when she’s promised to another man, but fate intervenes and this time, passion—and adventure—can’t be denied. Honor demands he stay away from the MacLeod’s enchanting daughter, but love has a very different ending in mind…